Pancakes are a breakfast classic. Sweet, fluffy, and delicious when paired with bacon (but then again what isn’t delicious with bacon) they’ve been helping people start their day for, well, forever. I love pancakes, but as the name suggests, they kind of sit more on the dessert side of the spectrum then breakfast—especially when topped with butter, whip cream and Aunt Jemima syrup (which is loaded with high fructose corn syrup). Don’t get me wrong, if you’re going to eat sugar, morning is the best time to do it (because you have all day to burn it off) but that doesn’t mean that you still can’t health-up your pancakes—at least once and while.

If you are a regular reader of this blog you know, I love to experiment—I’m a bit of a mad scientist in my kitchen. So recently I decided to try and make pancakes a little healthier. I follow a gluten-free/dairy-free diet, and try to stick to whole grains whenever I can so I decided to give a paleo version of pancakes a go; and was pleasantly surprised by the results. The paleo diet (if you’re new to the term) is also known as the caveman diet because it’s based on the notion that for optimal health, modern humans should go back to eating real, whole, unprocessed foods that are more healthful than harmful to our bodies. Check out this link for a more thorough description of the paleo diet.

I love grains (quinoa and millet are two of my favourites) so it’s unlikely that I will ever go full paleo. But I agree with many of the principles that make up the foundation of the diet, and as a result, like to cook recipes that fall into the category from time-to-time.

Getting back to my pancakes, the recipe that I decided to go for was from a cookbook called, Practical Paleo. As with most recipes, I tweaked it slightly so that it better fit with my taste. Since the recipe is grain-free I was worried that my pancakes would be dense and look more like hockey pucks then flapjacks. But thankfully my fears were put to rest the moment that I ate my first slice. My flourless pumpkin pancakes were fluffy, flavourful, and incredible filling—in a good way. I decided to top mine with unsweetened coconut yogurt, fresh berries, hemp hearts, raw almond slices and a drizzle of maple syrup, (the real stuff!) but you could top yours with whatever you’d like. Next time I think I might try homemade almond butter, sliced banana and maple syrup (which is allowed if you’re following the paleo diet). Give them a try and let me know what you think! You can also make a similar version of the recipe with bananas. I have included that recipe for that version as well. 🙂

Here’s to happy and healthy eating! 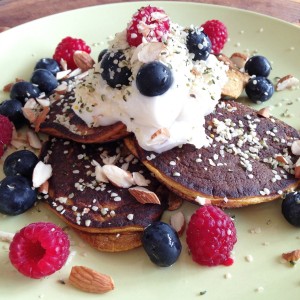 1/2 cup canned pumpkin, you can use homemade if you have it

2 tablespoons of pure maple syrup, this is optional, but I recommend that you use it

2 tablespoons butter or coconut oil (plus extra for your pan)

Serve with butter, cinnamon, sliced bananas of whatever else you’d like! Since these pancakes are flourless, I recommend topping them with something. They’re better when paired with something.

Plus some coconut oil for frying

Serve with butter, fresh berries and a little pure maple syrup. These are also great when paired with bacon 😉