Being aware of how you breathe while exercising is extremely important, especially when lifting. The simple act of changing how you breathe will help you get more out of your lifts. One particular method of breathing, the valsalva maneuver, can play a substantial role in the lifting process and ultimately help you improve your strength. The maneuver is characterized by breathing in prior to a lift, and holding it (your breath) during the exercise. This breathing process builds intra-abdominal pressure, and has been known to stabilize your spine and create more stability through your torso—which helps protect against injury. This style of breathing is especially important during heavier lifts where your body (specifically your spine) is supporting the brunt of the load.

Here’s how the valsalva maneuver works: 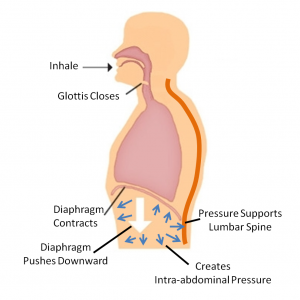 If that’s all confusing, here’s a water bottle analogy. Image you had an Aquifina water bottle that you placed upright on the ground with the bottle cap off. If you tried to step on the bottle, it would probably get crushed. Now, if you screwed the cap back on and tried to step on it again, what would happen? It would be pretty tough to crush the bottle with all that air trapped inside that’s got nowhere to go. A similar effect occurs with the body.

Now, the valsalva maneuver should not be taken lightly and should be used with caution. While it has several benefits in the development of strength and performance, it also temporarily raises blood pressure. This can sometimes lead to a feeling light headed, and in some extreme cases fainting. However, a lot of these cases can be attributed to the improper execution of technique or inexperience with breath hold and muscle contractions (see the videos below).

So if you’re not sure if you’re doing it correctly, or want some guidance on the maneuver, seek out a coach or professional who can give you feedback! With practice using the proper breathing technique, you’ll feel stronger in your lifts, allow you to lift more in the long run, and put yourself at a lesser risk for debilitating back injuries.

If you have any questions about breathing during exercises or other general training questions, don’t hesitate to email me at chad@balancemotion.com.