Due to their general makeup, hamstrings have the potential to be strong. But many athletes fail to tap in to their hamstrings strength and power.

Training your hamstrings to be recruited properly will give you the ability to run faster, decelerate and change direction more efficiently. It will also help better stabilize your knees; which is one of the key roles of your hamstrings.

Basically, when you have good hamstring strength and function you will increase your performance, reduce your potential for hamstring and groin strains, and prevent low back and knee injuries from occurring. So you can see why strengthening them is important. 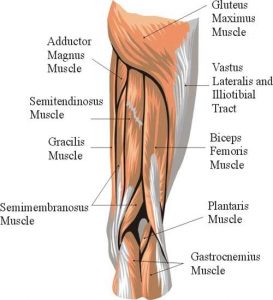 Another consideration when attempting to target your hamstrings (via specific exercises) is that people often have poor general recruitment of their hamstrings. They is typically due to the fact that quads tend to dominate most lower body movements.

This is why isolation hamstring work is imperative.

If you have access to a Hamstring Curl Machine, use that and do just one leg at at time. Seated Hamstring Curls are also good. Variety of your hamstring work is good as it all helps to increase neural drive.

To get even more specific, you can alter your foot position to address any imbalances you may have in your hamstring muscles. 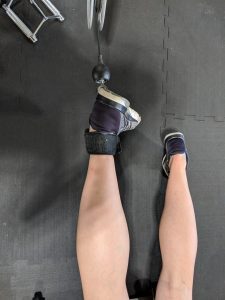 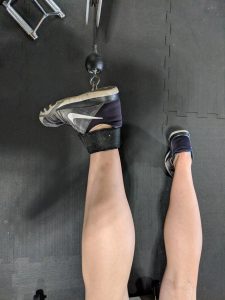 *This variation helps to facilitate recruitment of your bicep femoris.

How To Check For A Hamstring Imbalance

If you suspect that you have an imbalance between your hamstring muscles and want to confirm, here a trick I learned from Charles Poliquin.

Select a weight you can do for 6RM in the leg curl with your feet in the neutral position. As you reach muscular failure, your feet will rotate in one direction if there is a lack of balance between the two heads of your hamstrings. If they turn towards the midline of your body (medial rotation) your semitendinosus and your semimembranosus are too strong for your biceps femoris. If they turn away from the midline of the body (lateral rotation), your biceps femoris is too strong for your semitendinosus and semimembranosus.

Lastly, tempo matters with hamstring work. You generally want to slow down for the eccentric phase, which in the case of a Hamstring Curl, would be the lowering phase. A three to five second lower would be ideal.

If you would like a personalized program to help get your hamstrings hamSTRONG, Book A Strategy Session with us.

Get our latest Fitness + Nutrition Advice straight to your email!
Subscribe NowSubscribe
Thank you! Please check your email and confirm your subscription.
0Shares
About the author

Andrea Lawson has been a practicing Kinesiologist since 2008 and is the founder of Balance in Motion, a training facility created for people to rehabilitate from injuries, improve athletic performance, and crush their health and fitness goals. She is passionate about providing a space where anyone can step foot in and feel both comfortable and productive no matter the injury, age, or stage they may be at in their fitness journey. With this vision, Andrea has witnessed her clients achieve goals they never thought possible, and gain unmatched levels of confidence in themselves, helping them to Go Beyond Better.
PrevNext