To those who are unfamiliar with the body’s energy systems, they can be categorized into two main systems: anaerobic (absence of oxygen) and aerobic (in the presence of oxygen). The anaerobic system could be further subdivided into several subsystems, but for the sake of keeping things simple let’s assume that the anaerobic system is used from the very start of exercise (zero seconds) to about 60 seconds, and the aerobic system starts to take more of a dominating role from 60 seconds and beyond.

Now, what’s important to know is that both systems are always working to some extent, so it’s not like there is a clear black and white switchover between the two systems. Though, there are indicators we can measure to see which energy system is currently dominating, i.e. Lactic threshold.

Each energy system has its advantages and disadvantages.

Anaerobic athletes are often more explosive and are accustom to reaching a maximal effort in under 30-60 seconds, like a sprinter. The drawback for an anaerobic athlete is that because they are trained to be so powerful, their body is likely going to be less efficient at longer, slow endurance exercises because of the training adaptations that have occurred. The opposite can be said about aerobic athletes. While aerobically trained people do really well in longer duration, low-mid intensity exercise, their ability for power production and explosiveness during short bouts is generally lower comparatively. To learn more about the specifics of the body’s energy systems, check our this article.

As you can probably guess, it’s difficult to become very efficient with both energy systems. However, this is not to say that you can’t benefit from adding both aerobic and anaerobic training into your workouts. In fact, if you’re an athlete or someone who regularly competes in an anaerobic sport, you stand to gain a lot from adding aerobic training into your weekly program. Here’s why:

An anaerobic athlete has trained their body (muscles) to be explosive and powerful for short periods of time at high intensities. Due to the nature of this training, their heart is typically beating greater than 80% of their maximum heart rate. At such a high intensity, the priority is for your heart to beat faster so that it can pump blood through your circulatory system to your muscles. However, because the heart is beating at such a fast rate, the large chambers of the heart (ventricles) that eject blood throughout the body don’t actually fill to their full capacities. As a result overtime the heart starts to lose some of its elasticity to fully expand and contract that is present in more aerobically trained athletes. This elasticity is actually key in helping produce a larger amount of blood pumped out of the left ventricle (stroke volume) with each beat and for a faster delivery rate of blood (oxygen) to your muscles.

In addition, research completed by Bundle et al. in 2003 showed that with repeated bouts of anaerobic exercise, (like a sprinter for example) the main energy systems utilized shift more and more towards the aerobic energy system after each repeated bout. So what does that tell us? It means that while the anaerobic system still contributes to the short exercise at hand, it’s important to have a well trained aerobic system because your body will start to utilize your aerobic system more and more for repeated high-intensity bouts.

The big take home message here is that even as an explosive athlete, you can improve your performance by incorporating sustained aerobic exercises into your training program 1-2 times per week.  Here are some guidelines:

Integrate this into your training program for 4 weeks and watch how it improves your performance. Now, what are you waiting for?

If you have any questions about energy systems training don’t hesitate to contact me at chad@balancemotion.com.

Want to book a fitness assessment with Chad?

Click the image below to schedule your free fitness assessment. 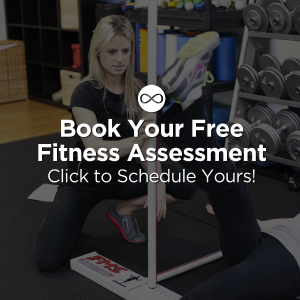