Keeping with this week’s theme of identifying, then addressing common issues surrounding lower back pain, I thought I would share some of the key reasons why you might be suffering from tight hamstrings – as they can lead to lower back pain.

The list below originally came from an Eric Cressey article that he posted a little while back, and explains a few different reasons why YOU may be suffering from tight hamstrings. Which—like back pain—is common.

All too often when muscles feel tight people tend to blame it on the fact that they’re not flexible, or that they’re not seeing an increase in flexibility despite religious stretching. If you are addressing an imbalance in your body and not seeing results it is important to investigate why, not just brush it off as normal and ignore it.

Not only does Eric do an excellent job of explaining the different reasons why your hamstrings could be tight, but he also outlines some of ways that you can correct your hamstring tension once you have identified where the problem is stemming from.

So have a read and let me know if you have any questions! I’m always here to answer them.

5 Reasons You Have Tight Hamstrings

1. Protective Tension of the Hamstrings

This is readily apparent in someone who has a crazy anterior pelvic tilt, which puts a big stretch on the hamstrings, which posteriorly tilt the pelvis. When someone is extremely anteriorly tilted, the hamstrings are constantly “on” to prevent someone from ending up with extension-based back pain, such as spondylolysis (vertebral fractures), spondylolisthesis (vertebral “slippage”), and lumbar erector tightness/strains. This is a problem most commonly seen in females (greater anterior pelvic tilt than men) and athletes.

Just because you feel hamstrings tightness doesn’t mean that the hamstrings are actually the source of the problem.  In fact, it’s not uncommon at all for those with lumbar disc issues to present with radicular pain, tightness, or numbness/tingling into the legs – especially the hamstrings. The symptoms may also come from nerve entrapment (most commonly the sciatic nerve) on soft tissue structures further down the chain.  Just aggressively stretching the hamstrings can actually make these symptoms worse, so it’s important to see a medical professional to rule out causes further up with the appropriate clinical exams, such as the slump test.

In order for hamstrings to really be short, one would have to spend a lot of time with the knee flexed and hip extended – so just imagine the position you’re in at the top of a standing leg curl. That’s a hard pose to hold for an extended period of time, much less do so on a regular basis.

That said, some folks do get somewhat close to that on a daily basis in the sitting position, and are therefore the most likely to really have “tight hamstrings.” They have to be in posterior pelvic tilt and knee flexion for a considerable chunk of the day – and even then, it’s still pretty tough to be truly short, as they are still in hip flexion.

These folks usually can’t distinguish hip flexion from lumbar flexion, so if you do a standing hip flexion assessment, rather than maintain the neutral spine, they’ll go into lumbar flexion (butt will “tuck under”).

The same trend will usually be noticeable with any kind of squat unless they have a tremendous amount of core stiffness to overcome the posterior hip stiffness that’s present. If you test these folks on an straight leg raise, it isn’t pretty, as the pelvis is already posteriorly tilted. In a pelvis that starts in “neutral” on a straight leg raise, roughly the first 1/3 of movement that you see comes from posterior tilt of the pelvis before the femur ever starts to flex on the acetabulum of the pelvis.  These folks are usually already posteriorly tilt, so that 1/3 is already used up; you’re really only measuring hip flexion and not hip flexion PLUS posterior pelvic tilt. And, as you can imagine, if someone is truly short in the hamstrings, that straight leg raise isn’t going to be pretty. Obviously, these folks usually have a terrible toe touch pattern as well.

This should also educate you on why you can’t treat all hamstrings strains the same. In the protective tension example earlier, we needed to work to regain stability to hold a position of a bit more posterior pelvic tilt. We’d cue glute activation, and use exercises that draw folks back into posterior tilt (e.g., reverse crunches). If you have someone has a pulled hamstrings because they are truly short from already being in posterior pelvic tilt, though, some of these cues and exercises would be contraindicated. You’d be feeding the dysfunction.

While manual therapy and stretching for the posterior hip is valuable, again, it must be followed by stabilization work at adjacent joints with the pelvis in a neutral position. These folks can benefit from training hip flexion above 90 degrees as well, as it educates them on how to flex the hip without rounding the lumbar spine.  This is one reason why I think a lot of the chop and lift exercises we’ve learned from Gray Cook are so fantastic; they teach us anti-rotation and anti-extension stability in various positions of hip flexion while the pelvis is in neutral. They make changes “stick” better.

Not to be overlooked in this discussion is the simple fact that the single-best predictor of hamstrings strains is a previous hamstrings injury. One you have an injury, that area may never be the same from a tissue density standpoint – whether it’s the surrounding fascia or the muscle or tendon itself. A previous injury can leave athletes feeling “tight” in the region, so regular manual therapy can certainly help in this regard.

Anecdotally, the athletes with the long-term problems seem to be the ones with the pulls up on the gluteal fold, right where the hamstrings tendons attach to the ischial tuberosity. The area gets “gunked up”in a lot of athletes as it is because of all the tissues coming together and exerting force in a small area, but it’s especially problematic in those who have a previous injury in the region.  Perhaps more problematic, though, is the fact that we sit on our proximal hamstrings attachments – and that isn’t exactly good for blood flow and tissue regeneration. 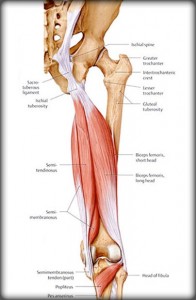 I haven’t seen any research on it, but I have a feeling that if you looked at this region in a lot athletes with ultrasound (similar to this study with patellar tendons), you’d find a ton of people walking around with substantial degenerative changes that could be diagnosed as tendinosis even though they haven’t actually hit a symptomatic threshold. My guess is that it’s even worse in the posterior hip region because a) we sit on it, b) the ischial tuberosity is a more “congested” area than the anterior knee), and c) the study I noted above used 14-18 year-old athletes, and degenerative problems will get worse as one gets older (meaning this study likely undercut the true prevalence across the entire population).

Very simply, an athlete with a previous hamstrings strain needs to stay on top of quality manual therapy on the area, and be cognizant of maintaining mobility and stability in the right places. They have less wiggle room with which to work.

Of course, the fifth reason you hamstrings might be tight is because you might actually have a hamstrings injury! It could be an actual hamstrings strain, or just a tendinosis (overuse issue where tissue loading exceeds tissue tolerance for loading). There is no one perfect recommendation in this regard, as a tendinosis or grade 1 hamstrings strain is going to be much more tolerable than a grade 3 hamstrings strain where you have bruising all along the back of your thigh.

In terms of maintaining a training effect with the less serious ones, check out Eric’s fantastic suggestions here.

For tips on how to correct hamstring tension, (including some exercise videos) please check out the full article on Eric Cressey‘s blog, or come see me at the studio 🙂 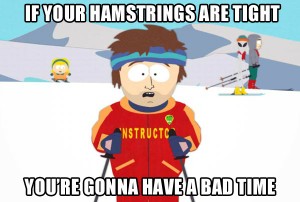 If you are not currently a member of Balance in Motion and would like to learn more about us and how we can help you Go Beyond Better please sign up below.

Get our latest Fitness + Nutrition Advice straight to your email!
Subscribe NowSubscribe
Thank you! Please check your email and confirm your subscription.
0Shares
About the author

Andrea Lawson has been a practicing Kinesiologist since 2008 and is the founder of Balance in Motion, a training facility created for people to rehabilitate from injuries, improve athletic performance, and crush their health and fitness goals. She is passionate about providing a space where anyone can step foot in and feel both comfortable and productive no matter the injury, age, or stage they may be at in their fitness journey. With this vision, Andrea has witnessed her clients achieve goals they never thought possible, and gain unmatched levels of confidence in themselves, helping them to Go Beyond Better.
PrevNext